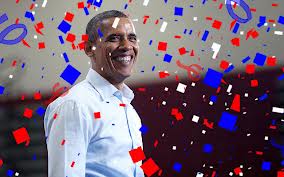 It’s a tough day for a cynic.  Try as I may to focus on the unresolved economic mess we’re in, the failure to deal with global warming, the 2 billion dollars that went not into education and health care but into nasty campaign ads, I find myself staring at the photos of all those people in all those lines and bubbling up from the grumpy places.  Not totally like God’s in his heaven and all’s right with the world, but damn near.  What a relief!  What a sense of relief!

America pulled it off.  They actually went to the polls and made it happen. They gave that guy in the White House with the Muslim middle name another chance.  More young people voted in this election than in 2008, can you believe that?  The gay vote went from 4% to 5%, and gays voted 77% for Obama.  (Never mind the other 13% - I’m not focusing on the glass half empty today.)  Latinos went 66% for him.   Even the Catholic bishops who sold their soul to the Republican Party and pitched their message from the pulpits couldn’t get through to over half the Catholic voters who went for Obama and for gay rights as well.

Women voted for Obama with a ten-point margin.  (These figures may not be the final tallies; they’re figures I picked up from PBS from exit polls along the way.)  That’ll teach you to mess with Planned Parenthood.  Young people – 6 in 10 voters under 30.

In short, Americans stood up to the fanaticism of the Tea Party, the White People’s Party, and we were not subjected to the nightmare of watching the guys that brought us into war and economic devastation get back the power to do it all over again.  Romney, and his full bevy of George W. Bush advisors waiting to take over, have to find another job.  Where are my dancing shoes?

In 2008 I got active in the campaign to fight Proposition 8, the ballot proposition that removed the right of same-sex couples to marry in California, and when we didn't make it I took the defeat personally.  I can’t recall a time when I had such mixed feelings, watching the country elect its first black president and spit in our faces simultaneously.   One step forward, two steps back.

This time it’s full steam ahead.  Obama gets reelected and in Maine and Maryland, for the first time, same-sex marriage is recognized as a civil right by the citizen voters, and not just by the courts and the legislatures.  And word is in that it is about to pass in Washington as well.  We’re just waiting for the absentee votes to be counted.  For forever and a day, it seems, we had to endure the taunts of the National Organization for (Straits only) Marriage as they rubbed our noses in the fact that anti-gay amendments had been passed in 32 states, and that only the allegedly liberal courts and craven legislatures had allowed marriage rights to happen – not the American people.  That balloon is now punctured, and the sound of the pop is sweet indeed.

And Minnesota, which would have been the 33rd state to pass an anti-gay amendment, went the other way, making it a victory on all four fronts.  Yesterday I was looking longingly at Spain for upholding same-sex marriage there and wondering whether my Danish was up to snuff, if Canada didn't want me.  Today, I’m at home in the U.S.A. and not going anywhere.

And Tammy Baldwin won her race for the Senate from Wisconsin – first open lesbian to do so.  The good news just keeps rolling in.

I know there’s also bad news.  The Republicans still hold the House.  We still have the Electoral College, our politicians are still largely bought and paid for, the attempt to overturn the death penalty in California failed.

But we’ll grumble about that another day.  Today it’s champagne in this household for the daddies, a fresh box of rawhide bones for the girls.

“Jubel, Trubel, Heiterkeit,” as my German friends would say.  It’s a trio of words usually used sarcastically, to mean the opposite of what the words signify, like when you’re supposed to feel excited but the cynic in you won’t let you.

But today the cynic is silent, and it’s