My oldest favorite cousin just sent me a link  to a rock group with a right wing stance known as Madison Rising.   Love her dearly.  I think she does this from time to time to make sure my heart is still pumping from the adrenaline. 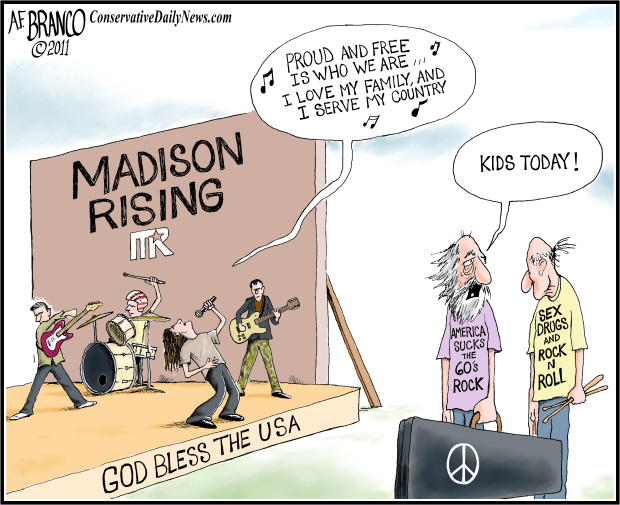 This is a time when I am about as proud to be an American as I ever get.  The reelection of Barack Obama made me want to eat the words I’ve been saying over the past many months about how clueless Americans can get, how lacking they are in critical thinking skills.  I’m reminded – and glad to be reminded – that once again I may have been hasty in thinking I know my fellow Americans, the same way blind men think they know the elephant.

I’m almost ready to run the flag up the pole and bake some apple pies and put on an old Kate Smith record.

Not really.  Apple pies, maybe, if I weren’t on a diet.

So when I saw the message that this rock group was singing the national anthem, I was primed to have a look.  What convinced me was this accompanying message from the original person forwarding the link:

I would have never thought I would forward our National Anthem being sung by a "hard-rock" group.  WOW!

Liberal talk-show hosts and comedians have recently criticized the National Anthem as being stupid, silly, too militaristic and more insults.

This band sings an updated version that will knock your socks off, a Navy vet sings the lead.  No matter what you are anticipating, give it a listen and see for yourself.

Great, I thought.  Skipping right over the cue in the words “liberal talk-show hosts” I say to myself, "Somebody is doing a rock version of the national anthem?  Must be in keeping with the elation over the Obama victory."

We are expanding.  Becoming more inclusive.  Puerto Rico may become a state, evangelicals are embracing gays, blacks and whites are intermarrying in ever greater numbers, Boehner says he may agree to taxes... Where will it all end?  Unity seems to be in the air.   And this band is preaching, according to their website, that we need to stress our American unity – just as Obama did in his acceptance speech.  It helped greatly to learn that this band went in to play for the Occupy movement.  A closer look showed they were not so much in support, evidently, as in demonstrating a “spirit of unity.” Fair enough.  Can’t fault them for that.  And so I had a listen.

And that’s one on me.  Suckered again.  One robin does not a spring make.

It really set me off, all this flag waving stuff.  I just got through saying I wanted to join in, when it comes right down to it, I just can’t.  I think the flag’s gone for good.  The right stole it and this seems to be a case where I’d like it back but possession is 9/10ths of the law.  Watching these guys sing the Star-Spangled Banner and parade all over the place with all those football field sized flags doesn’t bring out the patriotic feelings I have for this newly refreshed country, doesn’t make me change my mind that democracy is broken, despite all the evidence to suggest we are now fixing ourselves and putting ourselves back on track toward the old democratic ideals.  Watching this fusion of soldiering and flag-waving brings back the despair.

We went to war under that star-spangled banner.  According to the Iraq Body Count project, there were over 162,000 combat and civilian deaths in Iraq since the U.S. invaded in March 2003.  The London based Opinion Research Business polling agency puts that figure at 1.2 million.   Wherever you land on that spectrum, the death toll is staggering – all in a war brought on by neocon liars and a staggeringly large group of people suckered in by the lies.   Over 5000 of our own people killed in the process.  1500 more Americans missing an arm or a leg.

All that work to avenge 3000 deaths on 9/11 and are we really ahead?  (And two billion dollars on the election and is the political make-up changed at all? – but that’s another story.)

And no evidence the country has recognized this was another Vietnam, another pile of destruction, death, misery that will go down in history as not only cruel, but pitifully, agonizingly, stunningly unnecessary.  And what’s our response?  Try saying out loud that these deaths were in vain.

You know we can’t do that.  Instead, we put our hand on our hearts and some tears in our eyes and we talk about how we love the troops who died to keep us free.  And get behind a rock group singing the Star-Spangled Banner and talking about unity as a people and remembering the good old days when Reagan was president and how good it would be if we hid our diversity and pretended we are a united folk with a direct line to James Madison.

The vets, including those who put this band together, should be compensated for their terrible losses and treated with respect.   Buy their records, if you will.  And their T-shirts, which they’ll sell you online.

But let’s not miss the point that jingoism done in a rock music mode is still jingoism.